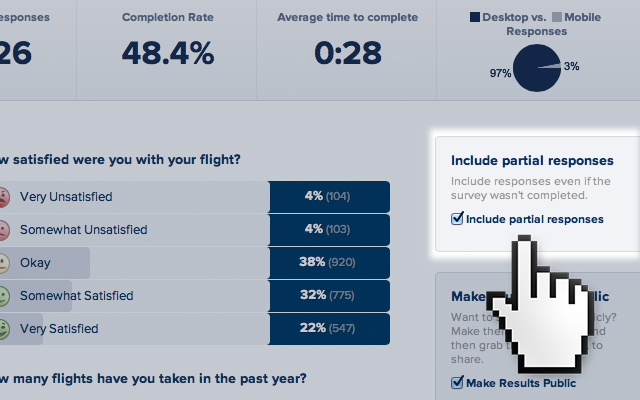 One of the primary goals we had in creating PopSurvey was to make the survey-taking process more fun. I use the phrase "respect the survey taker" a lot around here, because I think it's extremely important. It's important because when your customers feel respected, they return that respect back, and then some.

One of the easiest ways to show the folks taking your survey that you respect them is to keep your surveys short. Respecting their time goes an incredibly long way. And that manifests itself in the form of surveys with higher completion rates. People tend to bail a lot less when they know a survey isn't going to take their entire lunch break to complete.

But the fact of the matter is, people won't always complete your surveys. They might not complete for any number of reasons. And while we tracked the fact that people started but didn't complete a survey, we didn't track the questions that they had answered. So you were just left with knowing "500 people started my survey but only 400 finished it."

Well now we are tracking surveys as they are being taken and what that means for you is that you can now include partial responses in your reports!

A user might answer 9 out of 10 questions and many times it would still absolutely be helpful to know how they responded to those 9 questions, and now you can get that data!

Including that data in your results happens with the simple check of a box in the Responses area of any survey.