As a startup, you jump in to the game knowing you'll come up against a little competition. Many times, you got in the game precisely because you felt like you could take on the competition directly. And our story certainly has some aspects of that. We started PopSurvey because we felt (and still feel) strongly that the current survey and customer feedback landscape is awful on just about every front.

One of our biggest competitors (SurveyMonkey) is the proverbial elephant in the room when talking about online surveys. They completely dominate the landscape and have the lion's share of the market. So, it was quite interesting to hear from them about how they couldn't bear a "chimp scratching its butt" (see video below).

All animal puns intended. Can you guess which one SurveyMonkey just asked us to stop making reference to?

"We would therefore request that you remove all mention of monkeys on your website and marketing materials."

Being asked to "remove all mention of monkeys" has got to be some sort of legal first.

In all fairness, the letter was actually pretty nice and lighthearted, but as some old person somewhere once said, "If you can't stand the heat, get out of the kitchen."

An 800-pound gorilla just asked wee little PopSurvey to stop talking about monkeys. Literally. Don't talk about monkeys anymore. Who knew a 3-person startup could ruffle the feathers of company recently valued at over $1 BILLION? Though I guess referencing "feathers" would make them a flying monkey, as it were. Which just conjures up nightmarish images from Wizard of Oz. My childhood-self is in a corner crying. 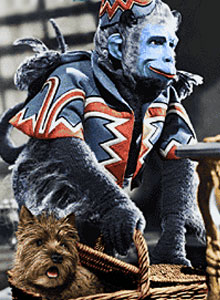 Sigh, they're making this too easy.

In their letter they say that using the monkey reference "attempts to associate SurveyMonkey with the rather unbecoming and insulting image of incompetent monkeys. (We also don't think you give monkeys enough credit )." Okay, credit given… those monkeys on that show are pretty clever.

Jokes aside, let's be clear about something. PopSurvey is simply a better product.

But, you should decide for yourself. Give us a try and let us know what you think. We'll let you talk bad about monkeys as much as you'd like.

So what's our response to SurveyMonkey? Lighten up and let's worry about making great products instead of what a video of a "chimp scratching its butt" infers. The banana is in your tree, SurveyMonkey.